She needs an Oscar for that pretty dark skin

Drip broke the levee when my Kelly’s roll in

Melanin too dark to throw her shade

She minds her business and winds her waist

This is an excerpt from Beyonce’s song ‘Brown Skin Girl’. It celebrates the beauty of melanin queens. We have come to realize that black is beautiful. This is the message she was trying to spread. Do not let society, social media, or stereotypes tell you otherwise. Melanin is a part of you, a beautiful part of your being and it is what makes you stand out from the rest. We are kings and queens and we are as important as anyone else. Let’s embrace and celebrate this beauty.

I remember growing up, sitting with my head between my mother’s legs as she brushed my hair. Gosh, was it painful? I would have red ears and a painful scalp after my hair was successfully detangled. It was at this young age that I learned the terms “good” and “bad” hair. Good hair meant your hair was closer to that of white people’s hair, while bad hair meant you had kinky and tightly curled ones, like me. Needless to say, when she suggested a perm (Dark and Lovely), which would straighten my hair, I was quick to agree. I, too, wanted good hair like the rest of my friends who had a perm.

The natural hair movement gained momentum in the early 2000s. A 2019 report by a market intelligence firm Mintel found that nearly eight in 10 Black consumers in the US now have chemically-free hair, and “prefer product collections made for their specific texture, hair issues, and styling choices.” There is nothing wrong with kinky hair and there is definitely nothing known as bad hair. You just need to use the right conditioner, shampoo, and even combs. The most amazing thing about this revolution is the self-love and acceptance that comes with a natural standard of beauty.

Miss Universe 2019, the 68th Miss Universe pageant, was held on December 8, 2019 at Tyler Perry Studios in Atlanta, Georgia, United States. Catriona Gray of the Philippines crowned her successor Zozibini Tunzi of South Africa at the end of the event.

Miss Universe, Zozibini Tunzi, a black South African woman made history by taking the crown in 2019. A dark skin girl with short kinky hair was at the helm of global competition. I grew up in a world where a girl with that skin color and hair type was not considered beautiful. Do you see the power of self-love? When you see yourself as beautiful, everyone begins to see that beauty too. In her final speech, she said, “May every little girl who witnessed this moment forever believe in the power of her dreams and may they see their faces reflected in mine. “I proudly state my name Zozibini Tunzi, Miss Universe 2019!”

Zozibini’s Miss Universe win was significant, set against the backdrop of centuries of under-representation for Black women in the beauty industry. Historically, beauty standards were set by and for white women. Kinky hair, dark skin, and more curvaceous features were inferior. Again, to my example in the article, I wrote titled ‘Embrace Your Roots’, a drum will never sound like a violin. Zozibini won because she is beautiful and not because she looks like a white woman. She won being a dark-skinned girl with undeniably nappy hair and that is amazing.

Mattel, the Barbie manufacturer debuted a new line of African American dolls called “ So in Style,” designed to better resemble black women’s facial features with wider cheeks, broader noses, and fuller lips. “I wanted to make sure that the makeup and face and skin tone was true to girls in my community,” doll designer Stacey McBride-Irby said in a video on the So In Style web site.

I remember growing up. I had white barbies, with blue eyes, thin lips, and long blonde hair. I was a chubby little girl with brown eyes and short black hair.  To some extent, having all white barbies hindered my sense of self-worth because I am a black girl. I spent a lot of my teen years trying to downplay my natural and ethnic features so as to fit in with white stereotypes. Maybe I was subconsciously trying to look like my barbie.

Another very important factor is the portrayal of super-heroes. In the past, this was unheard of, they were either a side-kick or put in the movie just for laughs. And then THE BLACK PANTHER emerged; the energy, the beauty of African culture, the depth of tradition, the resilience, the defeat of enemies, the Afro-punk, the unapologetic black swagger of King T’challa and his story, one of an ingrained birthright, legacy, and royalty. This movie changed the narrative of how black heroes were imagined. Chadwick Boseman played a pivotal role in inspiring black people, young and old, we can be our own heroes. We respect and honor this King for what he showed us.

Representation is important. No child deserves to feel like they are unworthy or unwanted because of the color of their skin. This generation has done a great job to ensure the next generation of black children has people to look up to, inspirational people who look just like them. This is not saying we have reached our goal. A lot still has to be done, however, steps in the right direction have been taken. We should be proud of how far we have come, after all, it is hard to think of yourself as good, beautiful, and worthy in a world that tells you otherwise. Slowly and surely, we will chip away the propaganda until we emerge victoriously. 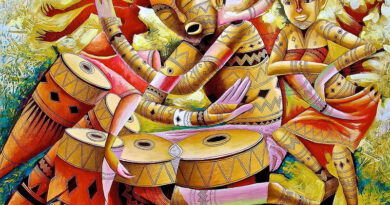 August 28, 2020 Diaspotechs Comments Off on Embrace your roots